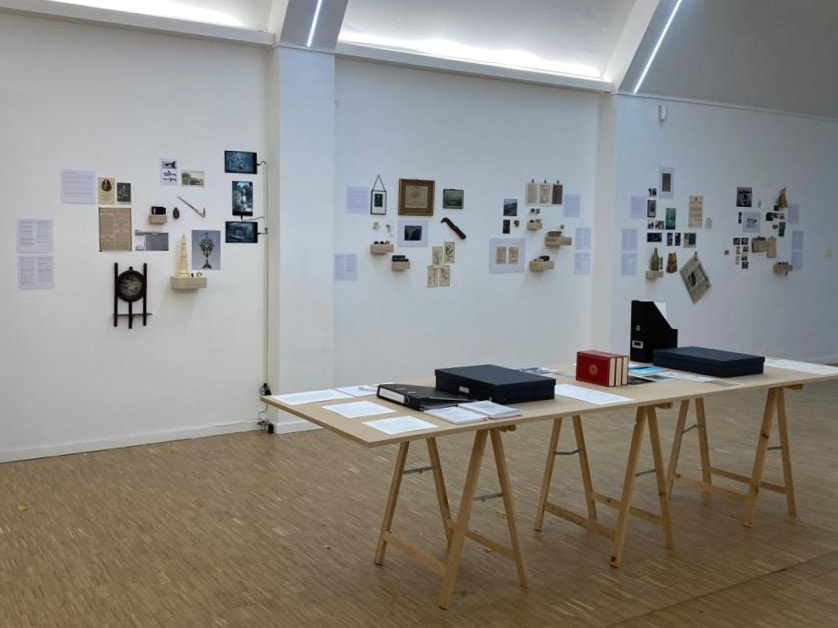 Farfara Archive is a fictitious archive of an island which may or may not have existed and which appears on a small number of 17th century maps of the Maltese archipelagoThe island of Farfara appears off the coast in various locations – sometimes appearing near the rocky outcrop of Filfla, and sometimes shifting westwards past the Dingli Cliffs and towards the south-western Mellieħa coastline.

While the history of Farfara can be seen in parallel with the Maltese archipelago, it also provides the opportunity to research fictitious states, historical myth, and contemporary public culture to create something that is quasi-believable within a simulated bureaucratic framework.
Since the 17th century, the island of Farfara has disappeared from maps, however its name occasionally appears in certain texts as late as the first half of the 19th century; ultimately, very little is known about this island. After extensive research, a hazy picture has begun to appear, one of an obscure and mysterious atoll which, though small, may have played a vital role in Mediterranean geopolitics, as the fourth (inhabited) island of the Maltese archipelago. Several personal testimonies, both historical and contemporary, although fragmentary, provide some evidence that Farfara not only existed, but that its intermittent intangibility has allowed it to play host to enigmatic events on the world stage.
The archives are made of a collection of artefacts and documents linked with six diverse personages, dubbed the six Farfara ‘witnesses’. After extensive research, it seems that these are the only six people who have documented travel to the island, although this cannot be fully verified. The six witnesses could be described as reluctant, since - apart from anthropologist Dr Elise Pisani - they have not voluntarily made their knowledge public.
Thus, the material presented here consists of their six private collections, either donated after their deaths, or sourced through subsequent research.

Mirza Aboul Taleb Khan (also known as Abu Taleb Tabrizi or Abu Taleb Isfahani)(1752–1805/1806)was probably an Indian tax collector working for the British. His legacy is a detailed account of his travels under the title “Masir Talib fi Bilad Afranji”. This travelogue is extraordinary not only for its reverse description from East to West, but also because it presents a unique description of the island of Farfara, including a list of indigenous fauna and flora.

Antonio Saxo Couvin (1752 - unknown) was known as François Boie in France, and as a French citizen was a frequent business traveller between Marseille and Malta. He used his double identity in order to leave Malta and subsequently hid in Farfara when he was prosecuted by his wife’s family. Although he was born in the same year as Mirza Aboul Taleb Khan, a relationship has yet to be found between them.

Abbé Achille Gustave Landais (1853-1928) probably never left France during his lifetime, excepting a mandatory trip to the Vatican, but he left behind an extraordinary collection of plants, fossils, precious stones and gold that were kept hidden by the Church until his collection, or part of it, surfaced in an auction sale. The holder of the items was the grandson of an Algerian soldier who had been a friend of Landais in Soissons during WWI. The collection hints at a previously unknown Phoenician settlement in Farfara.

Carmelo Borg Pisani (1914/15 - 1942) was a Maltese artist and Italian Fascist spy. He spent over a year on Farfara, intercepting radio messages to pass on to the Italian authorities. While he was on Farfara, it seems that Borg Pisani also explored the island’s topology, making notes of its geographic peculiarities, and exploring what appeared to be an abandoned mine. He was eventually caught and was sentenced to death by hanging for espionage.

Asunción Axiela La Sorte was a shadowy character in history, born into a privileged family in 1930s Spain. How she came to know about Farfara is unclear. Many questions remain unanswered, however documentation has surfaced showing Axiela La Sorte posing as an air hostess assisting the President Gorbachev and his wife during the 1989 USA-USSR summit off the coast of Malta.

Elise Billiard Pisani (1979 - ) is a French anthropologist and a visiting lecturer at the University of Malta. She has recently argued that the famous book “The Count of Monte Cristo” written by Alexandre Dumas should actually be entitled “The Count of Farfara”, since this island is the true inspiration for the novel. Dumas came to know of Farfara from his father, a general of Bonaparte’s army which ‘liberated’ Malta in 1798. At the time of writing, Billiard Pisani’s findings show that Farfara was for a time a refuge for slaves and that General Dumas, himself born into slavery in Martinique, had sworn to help them, against Bonaparte’s pro-slavery policy.
Proudly powered by Weebly